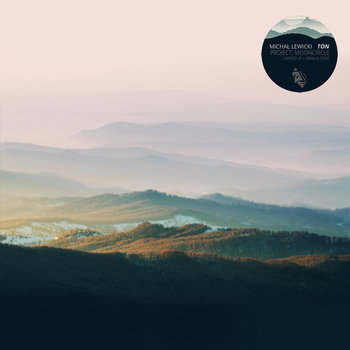 Under his Deam alias Warsaw-based electronic producer Michal Lewicki has previously been responsible for several EPs of distinctly broken dub-techno centred material over the last four years, but as its serene landscape sleeve art hints, this debut album under his given name ‘Ton’ sees him exploring considerably more contemplative and gentle terrain. Opening track ‘Fairter’ gives a good hint of what lies ahead as twinkling analogue synth tones give way to a fluttering backbone of broken house rhythms that smoothly shifts gears down into clattering hip hop breaks halfway. In many ways it calls to mind the likes of Caribou more than anything else as hazy melodic notes and percussive strums glide against the programmed rhythms.

The aptly titled ‘Pitch’ meanwhile offers a gorgeous minimalist side-step as pitch-bent analogue synths swell against a slowly rippling pulse of watery electronic tones, before ‘One’ offers a glittering ride through hazily muted pads, murmuring stripped-back techno rhythms and subtly-placed chimes that induces a curiously hypnotically rolling feel that’s more akin to one of Pantha Du Prince’s more recent explorations. Elsewhere, ‘Onno’ takes things off on a brooding wander out into blues-tinged bass chords and circling melodic tones that sees treated guitar tones gradually rising up out of the haze that’s generated, almost like some mirage in the desert. Indeed, it’s easily one of the most cinematic moments to be found on this excellent album, which sees Lewicki covering a lot of different bases without ever losing the overall thread.