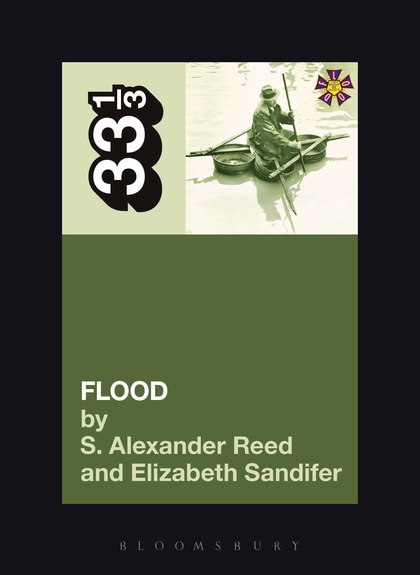 I’ve had a long and complicated relationship with They Might Be Giants. Like many people my age, I first came across the band when the album on which this book is based, Flood, and, more specifically, it’s main single, ‘Birdhouse In Your Soul’, was released in 1990. I liked it at the time, hearing it on the radio, but never really pursued it. A little later, a friend had the album and loaned it to me. In all, I found it musically dry, possibly even a little musically dated. So, the relationship never really went anywhere. Fast forward to 1998 and the track ‘Dr Worm’ was released and was also all over alternative radio in Australia. This time, however, my wife, who had missed them completely in the preceding decade, fell in love with the song and then the band and their entire back catalogue. Since that time, my relationship with them has, in many ways, been carried out vicariously through her love of the band, who have probably taken the mantle of her favourite artist. Each new release is bought and consumed immediately and we’ve seen them live on all their rare visits to Australia since then. In discussions with my wife, I’ve pinpointed the fact that, for me personally, I really only passionately love music that inspires my own music making in some way and They Might Be Giants have never really done that, even though I’ve come to enjoy them greatly, particularly their live shows. So when the opportunity arose for me to read and review the newest in the 33 1/3 series of books on specific albums, I jumped at the chance, knowing that the enthusiastic writing these books always feature would undoubtedly give me new ways into appreciating the band.

Thankfully, I can report that the book does not disappoint in this regard. As all good writing about music does, it’s made me go back and listen to the album much more closely than I ever have before. So, while I know each song on the album, I’ve never listened to them quite like this, fine details brought to my attention that I’ve never previously noticed. The writers, S. Alexander Reed and Philip Sandifer, high school friends, both became fans of the band on the release of Flood and their passion for it, and They Might Be Giants in general, shines through. The basic premise of their writing here is to frame everything through that title – Flood. Flooding becomes a metaphor for postmodernism, a metaphor for culture outside the boundaries of ‘cool’, a metaphor for lyrical surrealism; all the elements on which the album is built are given a different shade of the definition of ‘flood’ on which to stand. This sometimes means that everything is tied up a little too neatly in the authors’ view, almost as if it is a tightly constructed grand concept album rather than the sprawling mess it actually, thankfully, is. Of course, their response to this complaint is that the sprawling mess is an intrinsic part of that ‘flood’ metaphor. But, you get the idea.

As to what is actually said about the band and album, there are quite a few new shades of light which I appreciated greatly. Quotes such as that the album is â€œa playground of excess ideasâ€ (emphasis mine) is a beautiful one in helping understand how night lights, grocery bags and fondue forks can, in fact, shed such clear light on the human condition. The fight against ‘coolness’ is a central theme of the book. While the authors point out on numerous occasions that the band shy away from being labelled as flag bearers of ‘geek-rock’ or any such thing, they also engage the very obvious fact that the band has a large appeal to those (the authors included) not generally considered ‘cool’. They also give some excellent definitions of what this constitutes. â€œAs an individual trait, coolness is heavily marked by personal restraint and aesthetic focusâ€. This is incredibly insightful. Even zeitgeist shifts, where a previous underground makes deliberate moves to be the exact opposite of what is currently considered ‘cool’, are marked by simply a shift in where that ‘personal restraint and aesthetic focus’ is aimed, rather than breaking away those things altogether. They Might Be Giants, and Flood, it is successfully argued, are amongst the rare entities operating within popular culture who do actually subvert this. And that idea forms a large part of the discourse in the book. As an aside, it’s never mentioned in the book, but it’s interesting that the They Might Be Giants Ã¦sthetic markers (checked shirts, rimmed glasses, etc) have actually become markers of hipster cool 20-odd years later, which does place the argument under a little bit of duress, but the point that They Might Be Giants is not really an Ã¦sthetic anyway is well made.

What the book doesn’t do in a great deal of depth is really engage in the actual sound. While reference is made to production technique, it’s really only explored in the context of the ‘geek’ engagement with new technologies. While reference to appropriation is used, it’s really only in in the context of the ‘flooding’ metaphor of using everything available, rather than a real discussion of the actual sound. While a few songwriting tricks like circular melodies are mentioned in passing, the actual music is never really analysed in great depth. The focus is unabashedly on the lyrics and the image. Which is a bit of a shame because, for me personally, this is where I could have done with the most help to really get me inside the work of the band. As I mentioned earlier, They Might Be Giants have never quite inspired my own musical creativity – some more enthusiastic analysis of the actual sound is really what I’d love to read.

As always with books in this series, however, the read is highly recommended. It’s enthusiastic and, in many ways, fan-ish, but makes its case clearly, logically and in an engaging writing style. I learned a great deal about the band’s historical context and the decade build up to Flood. And, as I’ve already mentioned, reading it has led me to re-listen and notice details and connections I’ve never previously noticed. And that really has to be the aim of all writing about music – to inspire further and deeper listening.

Adrian Elmer is a visual artist, graphic designer, label owner, musician, footballer, subbuteo nerd and art teacher, who also loves listening to music. He prefers his own biases to be evident in his review writing because, let's face it, he can't really be objective.