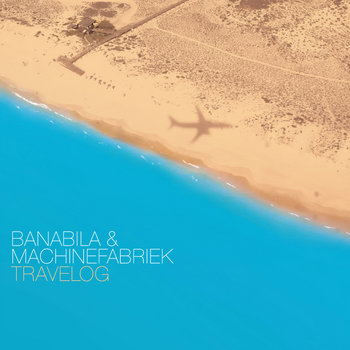 Given their shared extensive backgrounds in sound design and atmospheric music, the former as a prolific film scorer and the latter as an electronic producer with an intimidatingly large backcatalogue, it makes perfect sense that Michel Banabila and Rutger ‘Machinefabriek’ Zuyderfelt emerged with their self-titled debut collaborative album late last year. While that aforementioned collection saw them primarily exploring abstracted soundscapes though, as its title suggests this speedy follow-up album ‘Travelog’ manages to capture far more of a feeling of motion amidst its nine stripped-down tracks, which veer from ambience and music concrete into slow-burning, almost post-rock atmospheres at points. ‘Spin N’ Puke’ certainly doesn’t suggest any of the disorientation of its title, but instead takes things off on a wander through clattering drum loops and rich, swelling synth chords that calls to mind the sense of widescreen grandeur conjured by the likes of Godspeed! or Mogwai, only for the brooding walls of harmonics to gradually fall away into burbling background electronics.

‘Narita’ meanwhile more suggests a gentle tone poem as what sound like treated horn tones play against a backdrop of gently ebbing bass chords and gauzy, hissing distortion, the occasional half-heard snatch of voice merging into the wash of sounds to become just another texture as more harsh, overdriven drones rise to the foreground near the end amidst yawning walls of guitar feedback. Elsewhere, ‘Yarra’ offers up some slightly lighter shades in the form of an ambient segue that sees layers of treated vocal harmonies bleeding into the sound of field recorded birdsong and creeping double-bass plucks, before ‘Dinsdag’ sees clunking, meandering rhythmic loops introducing a lazy motorik feel as glitchy bleeps and buzzes interject against a hypnotic backdrop of swelling drones and rolling bass harmonics, in what’s easily this album’s most krautrock-tinged moment. There’s a deeply meditative feel to much of the music here, making ‘Travelog’ one of the most cohesive yet hard to categorise headphone soundtracks I’ve heard for a while.