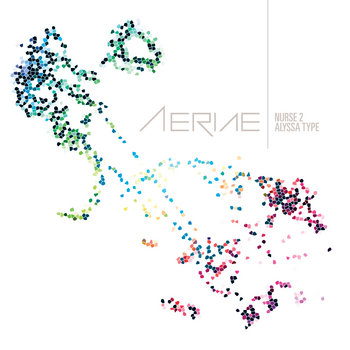 It’s been a good five years since I last heard from Aeriae, aka Sydney-based electronic producer Wade Clarke, whose self-released ‘Hold R1’ album ended up being one of the local IDM-kissed delights of 2008, with hints of Aphex and Autechre revealing themselves amongst its intricate arrangements. Five years on, this latest EP on Clan Analogue ‘Nurse 2 Alyssa Type’ comes across more like a mini-album, clocking in at 42 minutes in length, and offers up two new tracks from Aeriae’s upcoming ‘Victris’ album alongside five impressive and divergent remixes. While the fluttery post-IDM influences that have characterised Clarke’s previous work are still in evidence here, in this case things are geared far more around a 4/4 rhythmic pulse. Indeed, in its original mix form ‘Nurse 2 Alyssa Type’ calls to mind the sort of stripped-back yet metallic-edged techno crafted by the likes of Sleeparchive as eerie noodling synths dart against dark bursts of noise and robotic bass murmurs, the entire track seemingly on the verge of falling apart at points even as it smoothly glides on.

If the aforementioned track succeeds in nicely building up a palpable sense of paranoia, ‘Nurse 1 Cindy Type’ drops the pressure levels down a few notches as glittering synth arrangements float against a house-centred backdrop of kickdrums and handclaps, only for a vast wall of ominous bass synths and almost funk-centred stabs to suddenly drag things off into moodier terrain that carries a hint of Italo-synth drama. If the two original tracks manage to showcase a more lean and streamlined new side of Aeriae, the remixes included here are no less impressive. Lightwell teases out the more dance-centred rhythms on his lithe, tech-house ‘Nurse 2 Summer Midnight Mix’, sending eerie distorted washes of ambience and tumbling synths washing over a muscular backdrop of 4/4 kicks that’s equal parts menacing and groovy. CMI meanwhile opts for cut-up grooves, flickering snare programming and an almost tribal, growling bass pulse on his downbeat ‘Nurse Betty’, while ‘NDRSB’ sees Clarke teaming up with Che as Thallium & Milo for an eerie nine-minute ride through distant thudding techno rhythms and almost evil fairground-esque washes of melodic texture that’s easily the most hypnotic and intriguing moment here. A more than worthy comeback from Aeriae that bodes well for his upcoming ‘Victris’ album.