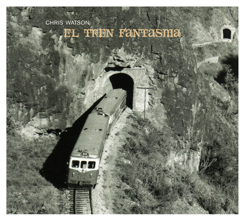 Chris Watson, after the flurry of virtuous riot that was Cabaret Voltaire, stepped sidewards into a second career with the BBC as a sound recordist for documentaries. While such an occupation opened up the area of field recording, specifically with the focus on nature documentaries which heighten the sense of ambient noise as a major part of the form, it also allowed for some adventures in experimental sound design. The very focus of the recording, naturally occuring sounds, and the manipulation of these recordings using electroacoustic techniques is a development from Musique Concrete, specifically the work of Pierre Schaeffer to whom Watson dedicates this work. Even if you obscure the musical form and look at subject, comparisons could be drawn to Kraftwerk’s Trans Europe Express, Banco De Gaia’s Last Train to Lhasa, Lee Scratch Perry’s Train to Doomsville, FUSE’s Train Tracks, or even KLF’s Last Train to Tanscentral. However most of these are trains as metaphors or vehicles for placement of musical and arcane obsessions into a document. Watson’s work is more a comprehensive analysis of the variety of sounds extracted from an experiential journey, historical documentation and geographical place placed into an artistic frame that is both reflective and formative of contemporary sound art.

El Tren Fantasma, (The Ghost Train) collates sounds gleaned from the production on BBC television series Great Railway Journeys on board the Ferrocarriles Nacionales de MÃ©xico (FNM). So while it has aspects of the documentary style of accurate portrayal, a bringing of the subject to the distant audience, the form of armchair tourism, it quickly displaces these expectations with the sonic distortions and heightened realities of particulars. ‘La anuciante’ opens the album and draws together the boarding call, whistle, steam, station ambiance, train breaking and shunting sounds but also takes sounds of the tension of metal on metal, of the train’s progress and extends through effect into drones and the journey into the industrial environmental faux documentary begins. ‘Los Mochios’ takes a bucolic dawn and warped Mexican folk music to restart the journey, from the cockerel cries and dog barks to the level crossing, stream breaks and then it is all concentration on the rhythmic tension available from the engine and the sound of metal on metal of the wheels. It is a spatial document to some degree as the aspects of sound approach dimensionally and it is this clear separation and construction of place that both insinuates your mind in the idea of it as an authentic document as well as it’s absolute implausibility, dead set simulacra and utilisation of an idea for effect.

‘El Divisadero’ brings on the extended drone aspects to full flight, where it extracts long harmonics from sounds and contrasts it to the trance like track effects, moving into burbling effects elicited from sonic manipulation of the same sounds and then entering into a drum pattern playing against the sound of the wheels in conversation. There are more subtle constructions, ‘Aguascalientes’, provides the long sound of approach, passing and departure of the train with the heightened effects added for a sense of psychodrama. ‘Mexico D.F.’ extrudes sounds and conveys almost the night of the journey, a conglomeration of slow rhythms and low sharp drones starkly placed against each other, rumbles and echoes that elicit a weary dread only given respite by a brief station stop mid track. ‘El Tajin’ lightens the mood with it’s early morning chorus and concentration on high tone aspects, insect and bird calls and gradual integration of a distant locomotive presence. ‘Veracruz’ beginning with the siren call finishes the album, bring together the more dynamic aspects of the train motion, fusing the hint of epic drones to the layered motion and spatial effects. The horn sounds the beginnings of immanent aspects of travel and the rhythm is insistent and pacy, moving insistently towards the exit announcement.

The thrills of this album are accumulative with repeated listening and it’s appeal is generally for those who are keen on immersive environments and sound art experiments. The ideas of the musique concrete, field recording, cultural archiving and immersive industrial environments are encapsulated in an extreme contemporary frame.