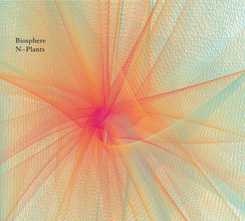 Geir Jenssen’s output under his Biosphere guise has been quite prolific, since the debut Microgravity a phenomenal ‘debut’s album in the arena of techno for this Norwegian producer. Previously he worked with the synth band Bel Canto and released an album under the name Bleep, which had all the depth charge effects and slightly dubby ambiance with a heavy nod to aspects of acid house. The second album as Biosphere, Patashnik, continued the slightly ambient house aspects of his work and Substrata, released with some unfolding drama through Eno’s All Saints label, proved to be the outstanding ambient album of the Nineties, a glacial isolationist epic. Since then there have been a string of releases that have headed into more oblique art directions with greater degrees of subtlety and rigor but without the mass appeal of his earlier works. The release of N-Plants was accompanied by a snippet of writing by Jenssen alluding to his interest in February 2011 of making an album based on the Japanese post-war miracle which sparked an interest in their nuclear power plants especially Mihama. The writing concludes with the words of a facebook friend : Ã¢â‚¬Å“’Geir, some time ago you asked people for a photo of a Japanese nuclear powerplant. Is this going to be the sleeve of your new coming album? But more importantly: how did you actually predict the future? Kind regards, David.'” The slight invocation to mystery and /or misreading is one that I could not let by but it gave me a chuckle as it is as good a hook as any to land your ears on.

Musically the album is a very discrete affair with quite dubbed out feel in a pristine manner and a metallic and warm ambience underpinning it’s minimal forms. As with Jenssen’s other works it conveys a melodic touch which work against the isolationist tendencies of his sound to invite the ear and sensibilities to a comforting place amongst the stark scapes of his ambience. ‘Ikata -‘ is a fine example of this which pars the sounds to aspects of drum programming over a warm ambient wall and introduces a focal aspect of static patterns as a display. ‘Monju-1’ has Japanese spoken word samples a concentration on melodic tones and long synth actions. ‘Monju-2’ incorporates aspects of Japanese instrumentation and has the field recording of a fly, but these are almost precursor aspects to the track which is moves into the melodic with dark undertone electronica, bringing back the fly as perhaps a chorus aspect to the work. ‘Fujiko’ ends the album and is composed of familiar Jenssen patterns as well as Japanese spoken word, it moves more upbeat and has deeper dub elements to it’s drums as well as subtle but insistent build that holds pace and provides an immanence without suggesting a destination to its impulse. Notably there is also a remix EP stemming from this album called The Sight Below which is a project created by Rafael Anton Irisarri.