Trending
You are at:Home»Latest content»Reviews»Michael Andrews – Me You & Everyone We Know OST (Everloving) 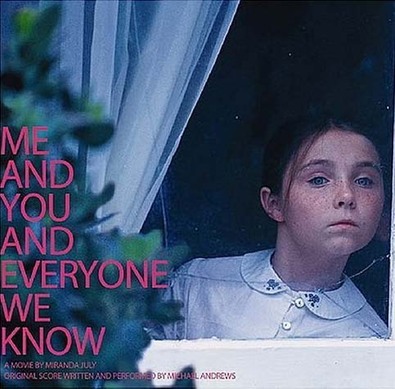 Miranda July’s stunning debut feature film Me You & Everyone We Know is a wonderfully hopeful story about loneliness. Set in a modern suburban Everytown, July plays a lonely video artist, Christine, and the film tracks her interactions with Richard a recently separated shoe salesman with two sons, Peter a young teenager, and Robby who is seven. Both Christine and Richard are dreamers. The film’s quirky trajectory confronts the viewer with brutally honest portrayals of people of different ages, the very young to the very old, looking for connections and love in a fast-paced, dislocated consumer society that spares little time or opportunities for such things. As Richard says wistfully of the early stages of his failed marriage “we just used to hold each other”. Anyway, this is supposed to be about the soundtrack . . . suffice to say, the film is excellent and works its charm with subtlety and wicked humour.

The soundtrack is by Michael Andrews who is probably best known for the soundtrack to Donnie Darko, a film which at least moves in similar circles to Me, You, & Everyone We Know. Andrews has written a series of quirky lo-fi synth tracks that perfectly capture the film’s ambience – wavering, faltering, uncertain – at times they resemble Casio presets refracted through a slightly distorting filter. The three non-Andrews tracks, Cody Chestnutt’s 5 On A Joyride, Spiritualized’s cover of Any Way That You Want Me and the wonderful Virginia Astley’s A Summer Long Since Passed – Chestnutt’s stripped back quivering organ sound, Astley’s muted piano motifs – fit almost effortlessly into Andrews’ score.

Both film and score are highly recommended.