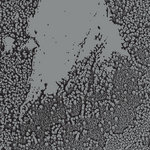 Urals is the title of the third but sadly final record to be made by Walls. Walls is comprised of two independent artists successful in their own standing and well known to the electronic music fraternities, particularly in the UK and European sectors. Separately they are Sam Willis a stalwart and  proponent for the UK’s own electronic music industry and pioneer of technology before it’s true time. A shared podcast Allez Allez  which was done in partnership with Steve Nolan between 2006-2011 was perhaps what most established Willis as an authority in electronica. Truly qualified when it comes to the creation of awesome ambient beats, Willis is joined by his playing partner, Alessio Natalizia, who makes up the second half in the whole that is Walls. An Italian national who has been residing in London for the better part of the past decade (or two) he is equally as prolific as Willis, as is his knowledge and appreciation for making music that washes over you. A skilled guitarist and frontman of Not Waving, yet another project housed under the Ecstatic Records name which, incidentally, is the pair’s own record label, you get an inkling these two when jamming together are dynamite.

Urals sees the duo taking a dark turn in the road on this record.  It’s a deeper, more immediately intense and grittier listen than any of the lighter in weight and mood tracks from their self-titled or Coracle releases of years gone by. According to Willis, this is in large part attributable to the current direction the two performers are taking themselves via their separate and independent music projects.

Natalizia’s recent release, Intercepts, of 2014, developed alongside Pye Corner Audio, saw him create an album in the style of spy film soundtracks, and certainly while on the Urals journey the winding and cloistered nature of some tracks brings this influence to the forefront of the record.

Willis himself loves ‘Voluta’ as a favourite on the album, something  I’m inclined to agree with him on.

His own words on this are that, “Alessio’s guitar line and the outro synths on this track really serve to deliver chills, unleashing an overall atmosphere and vibe that really works.”

Perhaps the vibe created throughout this album though is somewhat akin to being outdoors experiencing nature or even futuristic vistas. ‘Moon Eye’ and ‘Radiance’ are exemplary tracks, in my opinion, in developing the concept of exploration of new worlds in nature, which Willis admits could also have been an accidental byproduct to the record’s production taking place against the crashing waves of English coastal village Whistable.

“I have to say, living by the sea was really special, just the closeness to actual, proper ‘nature’ as it were. In the UK things are pretty tame when it comes to the natural environment, so having such close proximity to that at the time of recording was giving us huge violence of the waves and storms etc is very humbling and grounding.”

The overall sense of journeying that the record develops thematically for its listeners enables them to embark on an experience of discovery and that is what I love most. Perhaps because I’ve experienced the first two chapters of the Walls story, I appreciate the harder edge this record has chosen to reveal.

If their initial process to get to the substance of this record was to, overtime assemble sketches/ideas and, later, meet up to work on them in more detail, I am relieved and encouraged that the duo felt there was originality and creativity enough to embark on another album.