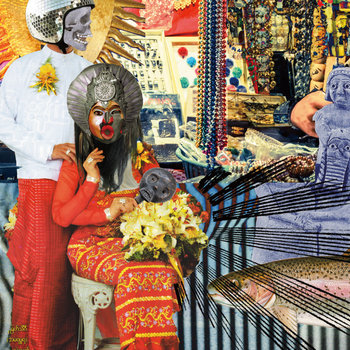 Jittery, battered, agitated, unsettled, turbulent, anxious, twitchy, uncertain, shaken up, unstable, unreasonable, messy, disturbed, startled, traumatised, discombobulated, troubled, unfocussed, wriggly, stirred up, messed up, flustered, skittish – these are all things that Fallopian Disco Force’s ‘Black Larvenroller’ made me feel. It is so full on as to be almost beyond belief – the aural equivalent of a hyperactive 8-year-old with A.D.D who has loaded up on red cordial, energy drinks and black coffee. At times, it is almost painful.

Opening track ‘Hand of the Night Eaters’ blends bleeping, shrieking, laser-beam electronics with jazz-inflected grindcore drumming and Aphex Twin-ish breakbeats and retriggers, the whole lot delivered at about a million beats-per-minute. ‘Wigan Binge’ opens with an extended cacophonous drum roll/solo that sounds like an amphetamine-inspired tribute to Keith Moon and Ginger Baker, before a frantic be-bop saxophone clears the air with a fast-paced line. And then the drums return, aided and abetted by more Aphex Twin-ish breakbeats and retriggers and more frantic saxophone lines, atonal electronic shrieks, and what could be a flurry of super-processed guitar licks.

‘Worm in the Wild’ tweaks the formula a little – a simple and repetitive start-stop drum pattern acts as a framework for a wall of electronic and processed sound that builds and builds and builds, until it drowns out this beat and leaves nothing behind but sheets of pure noise, the frequencies decaying and disintegrating and collapsing into an almost-inaudible hum. This tweaked formula continues on ‘Starship to Helix Nebula’; however, instead of a start-stop drum patterns, this time the drums assume an airy, mid-tempo beat that wouldn’t be out of place in a piece of contemporary hip-hop, while the electronics and processed sounds are toned-down just enough that theirs is more a far-out aural exploration than a full-on aural assault. The result is perhaps the most “musical” track on the album, and bears no small resemblance to the more harder-edged modern-day psy-rock.

‘Naboo Yacht Flotilla’ harks back to ‘Worm in the Wild’, only the wall of sound that drowns out the stop-start pattern this time consists of more jazz-inflected grindcore drumming and more Aphex Twin-ish breakbeats and retriggers. This heralds a return to the style of the album’s opening, except that the tracks that make up the second half of ‘Black Larvenroller’ wildly swing between aural exploration and aural assault, as if Fallopian Disco Force want to have their crazy cake and eat it too. The end result is intensity, density, insanity.