Trending
You are at:Home»Latest content»King Gizzard and The Lizard Wizard – I’m in your Mind Fuzz (Remote Control Records) 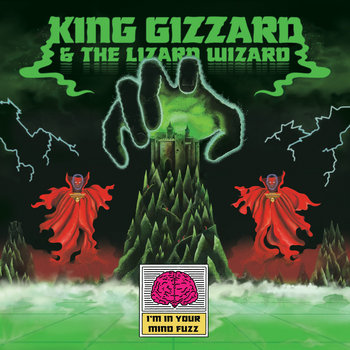 King Gizzard and The Lizard Wizard (KG&TLW) are a group who have been knocking about on the local Melbourne music scene since 2011. I first heard them last year when they were named winners to a music grant funded by Carlton Dry. It struck me, while rough around the edges, these prize winners were in possession of the guts and guile necessary to get out of Melbourne and succeed in their number one goal – to have their music reach national, even international, arenas.

Clearly $50K makes a difference to any band these days and it can obviously be thanked for markedly altering the path of King Gizzard and The Lizard Wizard, cos he we are, a year later, and look what they’ve accomplished. Thanks to the hefty cash injection they have been free to tour both here and overseas as well as allowing them some creative cataclysms, turning their attention to the studio and churning out not one album but two during 2014. Oddments being the initial offering to come from under their scaley-cape and, now, I’m in your Mind Fuzz has just hit our airwaves. Whoa, that’s a bumper 12 months for KG&TLW.

The comradery and jam power that must abound when seven lads get together is reflective in the album I’m in your Mind Fuzz. Certainly, it gives a sense that a seven-piece surfer-rock act is laced with freneticism.  An obvious penchant for playing and producing psychedelia infused rock tracks emerges and with this the pace and style for the album is set – seeing it kick off with energy enough for a Woodstock reunion.

Confusingly (or perhaps not so much) the first two tracks plus the fourth all contain the word ‘mind’ and configurations of ‘I’m in’, ‘I’m not in’, and ‘I’m’; plus Fuzz which create a dearth of similar sounding bridges with some obvious tweaks including the reverb and ‘wa wa peddal’ integrated for good measure.

Like modern musos MGMT and Tame Impala, who have possibly provided some inspiration, King Giz and The Liz Wiz have, it seems, mastered the key to achieving reverie to rock-n-roll of the sixties and seventies. Timely, given ‘Summer 2014’ is almost upon Australian audiences. As far as a stand-out track, eight minutes of laconic, Cali-surfer rock is the definite highlight and arrives at the final song “Her and I (Slow Jam 2)”, a tribute to finding love and leering ever so slowly into it via the ‘drive-in innocence’ of yesteryear.

All the elements of psychedelic rock can be discerned throughout this album’s tracks, and overall it’s a ‘fun’ concept piece which obviously leans heavily to an audience baited and ready to swallow these acid-trip tales. The prolific approach adopted by the KG&TLW boys evidently leads to querying whether the rule of quality over quantity has been adhered to. Because the turning out of two albums in less than 12 months is indicative of a wealth of musical talent and inspiration being present within the group, but I stop short at really noticing any mystery or intricacy illustrated in their songwriting and musicianship. Rather, I think the focus for King Gizzard and The Lizard Wizard here is to find a way to sustain their love for travel and rocking out together, and it surely can’t hurt to have two albums worth of material to dish out to audiences and hone their psychedelic craft. And, hey, if their love of playing leads to a healthy and multiplying fan base, that can’t hurt either.