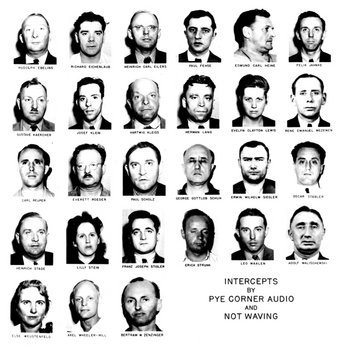 What happens when an LP comprised of two distinct halves from two quite distinct producers is offered up to the internet? Is the key to producing ethereal magic in this context to ensure that the tastes of those two producers converge just enough to tease out the nuances that would otherwise be left untapped?

Everything that there is to love about the production of electronic music is, to my mind, summed up on the latest collaboration from Ecstatic Records. Intercepts, both in concept and delivery, embodies something I tend to find lacking in many recent releases – a truly creative execution. Careful mystery and capitalisation are embedded to create momentum and through this process, explodes the idea of ephemeral, surreptitious and sonic nuance.

Martin Jenkins (a.k.a. Pye Corner Audio) along with Alessio Natalia (a.k.a. Not Waving) are the two masterminds responsible for Intercepts, both artists already renowned, independent of the other, for crafting irreverent, emotive and epic tracks that meander their way through layers of monophonic synth and drum machines to lull their listener to a sense of fulfilled betrayal. Solo, their catalogues invoke a revival of 70s and 80s Darkwave and with Intercepts, said to have been inspired by the milieu surrounding the shadowy world of international espionage, they continue the trend.

One of the clever things about this album is its structure. A traditional Side A, Side B approach means that the former is all Pye Corner Audio. He lays the foundation for deep, brooding bass lines and mechanisation reminiscent of the score to a Soviet era spy film. If you aren’t immediately transported to the headspace of a double agent whose cover is about to be blown then take a listen to ‘Twisted Wire Pair’ and you will be. Side B on the other hand, departs from the drudgery of Cold War spy-dom and zeroes in instead on the excitement and exhilaration of a life spent undercover. The stand out from East London based Natalia is without a doubt the cataclysmic climb of ‘Like Shooting Fish in a Barrel.’ Industrial techno layered within an unreal espionage cosmos brings about ambient auditory magic which is hard to fault and is, to these ears, simply amazing. It may exist in two parts but, while listening to either side it becomes apparent how often one reflects and echoes the other and just how comfortably these two soundscapes can be blended.

This album is a top contender for the prize of best creative collaboration 2014 (if, in fact, no one is offering this prize they should be). Rich and delectably enticing, if you’re a fan of deep and hypnotic electronica, then I strongly recommend this release.