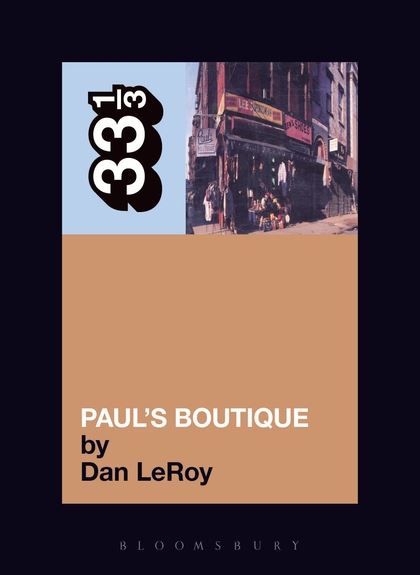 In the 1993 book â€œWill Pop Eat Itself?â€ Jeremy Beadle attempted to interrogate the ever-shifting landscape of popular music, which over the previous decade had been revolutionised by the increasing use of samplers. Considered a ground-breaking text twenty years ago, the book is worth returning to as a sort of time capsule – but beyond posterity, Beadle’ text has undoubtedly dated, particularly in the appraisal of the subject matter and the author’ dependence on the “popular’ opinions of other music critics at the time.

For example, take this little gem of an extract from the chapter “Scratching Where It Itches’ –

This quote, one of two references to The Beastie Boys, makes it clear that Beadle had no time for The Beasties in his book, even though their now-landmark album Paul’ Boutique, possibly the ultimate sample smorgasbord, had been released just four years earlier. In reading Beadle’ book now, Paul’ Boutique is the “elephant in the room’, especially in light of the highly detailed and revelatory historical account of the album’ creation that forms the basis for LeRoy’ book.

For the uninitiated, the 33 1/3 series comprises small, relatively concise books covering the making, history and post-view of outstanding albums by a wide variety of artists. Paul’ Boutique is number 30 in the series, and the aim of the series editors is to publish 100 books in ten years. Having read other books in this excellent series, the opportunity to review Paul’ Boutique was hardly considered a chore. But still, it did seem a little odd to be reviewing a book that was published almost eight years ago and simply appeared to have found a new publishing house. But as fate would have it, there are at least a couple of worthy and relevant reasons why you should read this book and go listen to Paul’ Boutique – even if you’ve never listened to the album, or the Beasties for that matter.

On first appearances, the recent brouhaha and resulting legal action taken by the remaining Beastie Boys against toy manufacturer Mattel for the bastardised, unattributed use of the track â€œGirlsâ€ in an (admittedly cool) advertisement might sound a little like the pot calling the kettle black. Whilst it’s well known that the Beasties love a catchy “hook’ sample, the extensive sampling and layering on Paul’ Boutique is such that it surpasses most if not all other “sample heavy’ albums (yes, even its contemporary, De La Soul’ 3 Feet High and Rising). In reality, the album’ mere existence is phenomenal – if Paul’ Boutique was attempted in the context of current day copyright and moral rights legislation, the cost of the rights for every single one of the hundreds of samples on the record would be nothing short of prohibitive. The record, simply put, would almost certainly not exist.

But good thing it does – and this is another reason you should read the book, because the album is coming up to its 25th anniversary. After the shock of realising so much time has passed since Paul’ Boutique was released, reading LeRoy’ book became an even more worthwhile task. The warts-and-all back-history of the Beasties and Def Jam is spliced against interviews with the Dust Brothers, the Beasties, and Tim â€œMegadethâ€ Carr, who signed The Beastie Boys to Capitol Records. Accounts of various recreational activities and distractions create a hazy, LA smog-like backdrop to the making of Paul’ Boutique that is everything one might have expected – and then some. And yes, for once and all, the myths of the â€œEggmanâ€ are confirmed to be true.

Weaving together an always interesting set of characters and an almost-too-strange-to-believe narrative, LeRoy deftly balances out the tales of the crafting of Paul’ Boutique against a series of detailed track dissertations that cover many of the samples utilised on the album. For both the seriously dedicated and the merely curious, the website http://www.paulsboutique.info provides an exhaustive and effectively “peer reviewed’ list of samples for the album, with footnotes to boot.

Unlike the “disappointing’ sales and very mixed reviews that Paul’ Boutique received when it was released back in 1989, LeRoy’ book deserves no such treatment – particularly as it achieves two key criteria for this type of text. Firstly, it takes a rigorous approach to the research without seeming heavy or “academic’: like the album itself, the book is clever, complex and yet very accessible. Secondly, like any great album review it makes you want to listen to the record immediately, and not just once but over and over again. The book reminds you that Paul’ Boutique was and is an organic, mind-twisting musical experiment which has had an undeniable and ongoing influence on a broad range of artists and genres. With its unique structure, the album is a rewarding listen that blurs contexts, styles and cultures in such a way that neither hip-hop nor popular music have ever really recovered -and not that we would want them to either.