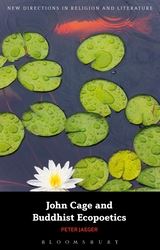 The centenary of John Cage’s birth last year prompted widespread celebration of his life and work, with a mass of performances, events, recordings and publications. Among this activity two releases stood out: EM Records’ John Cage Shock LPs, collecting performances from Cage’ massively influential, for all concerned, 1961 tour to Japan; and Kay Larsson’s Where the Heart Beats, examining the seminal early stages of Cage’s development alongside his interest in Zen Buddhism. The lead up to 2012 was hardly quiet in Cage world either, with Kenneth Silverman’s exhaustive, and exhausting, biography Begin Again published in 2010, New World Records’s acclaimed Music For Merce box set also released that year. Subsequently New World’s The Art of David Tudor collection came out this year, featuring many works by Cage and others strongly under his influence, while Mode Records’s Cage Edition keeps going, volume 49’s The Piano Works 9: First Recordings released last month.

While this sort of centennial activity is not unusual, Cage has certainly inspired more than most, and it hasn’t slowed down. Admirers and detractors alike would agree that there is more (or less) to Cage than most artists. He was prolific in all his endeavors, which stretched to poetry, criticism, philosophy, painting, sculpture and performance (not to mention mushroom picking, gardening, rock collectingâ€¦), yet his appeal is not down to the breadth of his work; nor quite to its nature, whatever the medium. His ability to make everything he touched somehow Cageian does get us close, to the way in which his philosophy was embodied, indeed enacted, in all that he did. His work becomes a wholesale introduction to a radical approach to art and life (and with Cage the two are very much intertwined). Cage’s Zen influenced work did not explore, analyse or promote Zen ideas, but did it.

Peter Jaeger’s book John Cage and Buddhist Ecopoetics explores this acting out of Zen principles, contrasting Cage’s work (specifically his writing) with that of contemporaneous Buddhist poets, and celebrating Cage’ complete immersion in Zen through his work as a radical challenge to Western values. Consequently there is little discussion of Cage’ music, for that look to Larsson and Silverman, and to the recordings themselves (Cage’ music is never really about music anyway), but Jaeger offers a more vital reading of Cage’ enduring power, with particular urgency for these weary late capitalist times.

To get closer to Cage, Jaeger employs a chance-based approach to his text’s layout, using the I-Ching, a la Cage, to determine paragraph and spacing length. This means large gaps of white space on the page, paragraphs of varying length (from as little as one word), sentences left hanging. Text wise nothing is sacrificed, unlike with Cage, sentences all read normally, so the “disruption” is minimal, and consequently so is the impact. It does little therefore to â€œreinforce, at a formal level,â€ as Jaeger states in his – standardly typeset – introduction, â€œâ€¦ Cagean concerns, including… the Buddhist void, textual materiality, the operation of nature and boredom.”

A poet himself, Jaeger’s understanding of both Cage and Zen is extensive, his writing is always clear and persuasive, and his insights frequently revelatory. The book is divided into two sections: the first, entitled “The Imitation of Nature in her Manner of Operationâ€ after Cage’s appropriation of Ananda Coomaraswamy’s definition of art, examines Cage’s relationship to Zen and how his writing delivers on this claim; the second explores Cage’ engagement with society and his work’ political impact. In â€œLecture on Nothingâ€ (1949) Cage writes “I have nothing to say/ and I am saying it/ and that is poetry/ as I need itâ€, his 4’33” for poetry, and for Jaeger this â€œmaterialistic exploration of silence and poetic languageâ€, alongside Cage’ other negating effects including indeterminacy, repetition and boredom, effectively signify the â€œBuddhist void.â€ All other Buddhist Ecopoets, as Jaeger demonstrates, use traditional language structures to represent and imply Buddhist ideals. The sheer noise – or silence – of Cage does not narrate stories, events, or signify anything. â€œInstead they offer an overload of non-semantic nothingness, a flattening out of conceptual logic.â€ This takes the reader directly to the source of Buddhist Sunyata, nothingness, not skirting around pointing to it. â€œCage from the mid 1960s does not question the relationship between binary terms such as nothingness and notation, but provides a notation of nothingness.â€ As Cage devotees would agree, Cage’ work is not to be taken â€œas a preconceived aesthetic object or as a site for conceptual reasoning, but as an occasion for lived experience.â€

With this established, Jaeger is in a position to argue for Cage’ position as antithetical to, and therefore his importance as a challenge to, Western capitalist society. Using Lacanian psychoanalysis, via Å½iÅ¾ek, as a lens through which to view Cage socially and politically, Cage’ embracing of silence, his celebration of boredom, and his rejection of the individual subject are seen as crucially opposed to Western values. Cage too poses a distinctive kind of threat, in that his zazen, his form of meditation and Zen engagement, was lived experience, enacted through writing, music, visual art and other forms of cultural production, engaging both directly and obtusely with mass culture. Cage’ Zen is intrinsically anarchist, in that it rejects all forms of imposed authority, government, and most importantly the denial of the essentialist individual. â€œZen anarchism is thus constructed as a personal response to social conditions rather than as the enforcement of an institutional agenda for social change. And this is precisely the anarchist logic we find in Cage’ writing.â€ Cage’ writing, and his work in whatever form, offers readers â€œthe means to organize their enjoyment and to foster a new and alternative social bond.â€

Jaeger’ Cage is an idealist, so of course there is much that is unexplored here. Delving deep into Cage’ music is thrilling, and there is still much to there to analyse. Reading Cage’ writing remains a particular pleasure, and his texts are all readily available. For Cage the man, his life, and Buddhism Larsson’ Where the Heart Lies offers the most engaging introduction, and it is worth looking far and wide for his dalliances with other movements and thinkers, from Dada to electronics, and from Duchamp to Joyce. Flesh and blood details are not to be found here. Once you’ve digested all that however, it is time to take on Jaeger’ argument, and attempt to introduce Cage’ visions to your own world.