Trending
You are at:Home»Latest content»Articles»Mystery Twin: “I was wanting it to be, you know, this state you get into where you’re not where you’re going but somewhere in between: you’re just travelling.” Interview by Bob Baker Fish It’s been four years since the last Pretty Boy Crossover album, We Are All Drifting, an award winning collaboration between Jason Sweeney and Cailan Burns, aided by contributions by video artist Julio Soto. Since then Sweeney has released gorgeous ambient albums under the Panoptique Electrical moniker, whilst the other half Cailan Burns has been mysteriously AWOL. It turns out he’s actually been labouring over his debut solo project Mystery Twin. Labouring may be the appropriate word because some of the tunes on this album of beguiling organic electronica date back at least eight years.

“If you played his album and my album at the same time it would probably sound like Pretty Boy Crossover, Burns quips. “That’s what’s funny about it, I can hear it.”

To Burns’ ears both the Panoptique Electrical releases and the Mystery Twin album clearly betray both the strengths and weaknesses of the individual artists. “I was always the person who did the rhythm with Pretty Boy Crossover and a little bit of the melody,” he reflects, “and Jason would be the one who sticky taped it together. I’d start stuff really well, give him some melody line or beat, and he had the knack of making it into a song. I learnt from him, (but) then thought I better step up and try and finish something myself.”

Geography has always been an issue for Pretty Boy Crossover. If they’re not living in different states, they’re living in different countries: Burns was overseas in Japan for over two years where he ultimately met his wife Yoshie, who sings on the Mystery Twin album.”

“I got back from Japan in 2007 and I had all of these tracks, probably I’ve even got heaps more that I haven’t finished, another album worth really. John Lee (Mountains in the Sky) and Cornel (QUA) would hear it and they’d be like “you gotta finish this thing.” It took another three years to get it finished, with a lot of their help as well.”

According to Burns it was Lee’s touch that impacted directly on the sound of Mystery Twin, making the sounds bigger, cleaning them up and bringing them out in the mix. “He added some touches (keyboards) here and there. Cornel played some Moog guitar, which was amazing. Then there was the suggestion of dropping the track back and bringing up something else, or making something really loud and overtaking the beat, rather than being safe and keeping everything to a level. Like Os Mutantes. You know how they could be playing and then this guitar solo would come in and it would just be ridiculously loud and through a weird amp effect? I always though that was bizarre, not normal, like it came out of nowhere. My dream is to make music as nutty as that.”

The result of their combined handiwork is nothing short of startling, a unique form of deep, melodic and gentle electronica, imparting dreamy and wondrous sounds with a clarity of focus you can only get through time.

“I’d make the basis of the track not finished and I’d put it on my iPod and I’d get on the train to go to work and I’d think what can I add to it, and it became this travelling music. I was wanting it to be, you know, this state you get into where you’re not where you’re going but somewhere in between: you’re just travelling.”

“Often if I’m listening to it and I hear something happening outside the headphone space I get influenced by that,” he continues. “Sometimes I’ll be walking along and I’ll hear the cicadas in Japan for instance, and I’ll think it goes (well) with the music so I started putting sounds into the music that are like that. I love all kinds of music, but the music that I want to make I like to incorporate the sound around you as well. 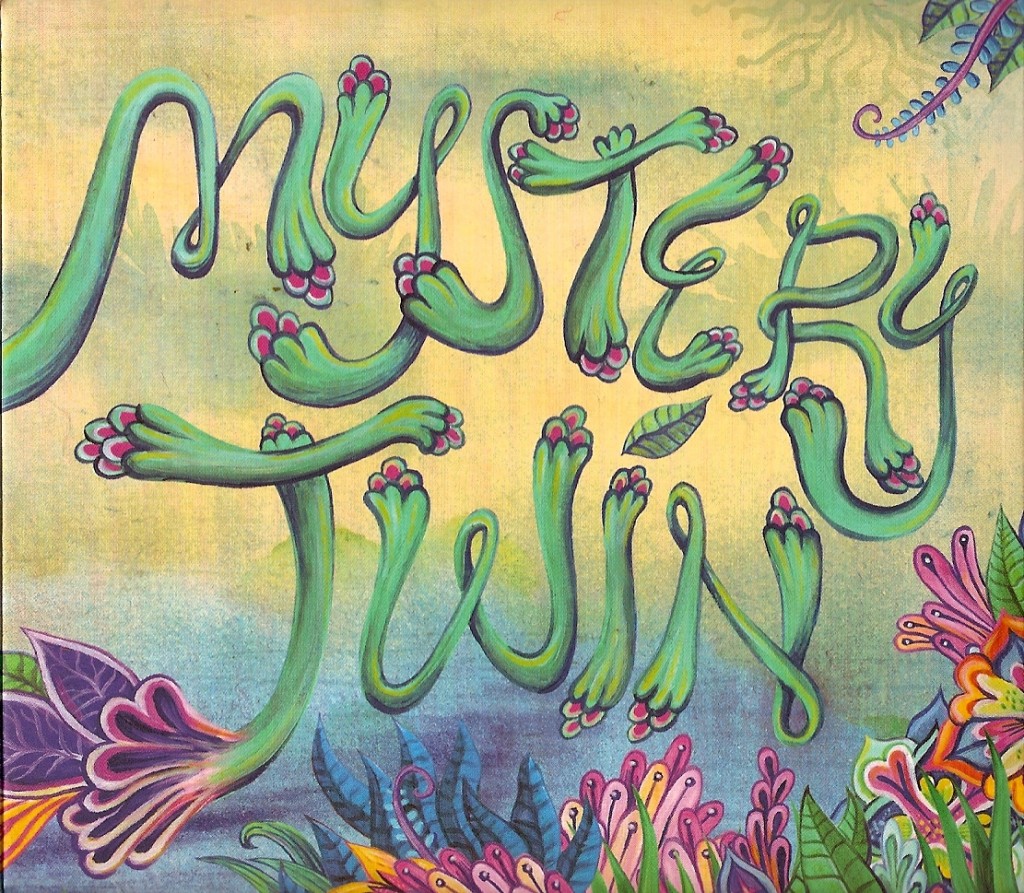 “I climbed mount Fuji and I had this stick that had these bells, and every walk was (accompanied by the) rattling of these bells. But then everyone had these sticks so the sound was around me and it’s now in “Infinity Plus One”. When I listen to that song I get the feeling of climbing Mount Fuji. That’s kind’ve where I’m at with music I think.”

But that’s only half of it. Burns is also responsible for the incredible artwork, these strange beautiful multi coloured creatures that adorn the CD and pullout poster.

“Originally in my head it was going to be a book with a CD in it. A book of art, almost like a little Golden Book with a CD at the back.”

These characters seemed to crystallise whilst in Japan when he was given a book of Japanese Ghost Stories by Shigeru Mizuki.

“I’d already developed my own characters but they all sort of morphed into these mixtures of Jim Henson, Maurice Sendak, and Japanese Ghost Stories. I really loved Where The Wild Things Are when I was young. When I look at them I see a mixture of things I’ve liked over time.”

“But I’m very interested artistically and musically by Japanese culture,” he continues. “I have memories of seeing the movie Nausicaa when I was young and I was really influenced by it, just the style. Kids were influenced by Marvel and I just didn’t get it. They were into big muscled men while I was into cute things with big eyes,” he laughs.

Of course there’s a darker side to Japanese culture such as Takashi Miike, Tetsuo: Body Hammer or even the Boredoms and though Burns appreciates the extremity, he’s a sucker for the cute and cuddly.

“I actually liked Tetsuo Iron Man,” he admits. “I really love that. I really like that dark side of the culture, but if you look at my art on the Mystery Twin album it’s pretty sweet. It’s dark, but cute dark. I wasn’t into punk music. When I was young I was into metal, but it was hair metal. All the tough kids at school were into Iron Maiden or Megadeth, I was into Poison, the hairdos and eye liners,” he laughs self deprecatingly before muttering, “Lightweight.”

A lot of the characters seemed to be lurking within him, though again it was whilst in Japan that he discovered them.

“When I was in Japan I did a lot of meditating, and I found lot of images just popped up in my head a lot. When you’re meditating you’re trying not to have thoughts but some of them were images of drawings and paintings and I would go ‘uh remember that’s and move on and keep meditating. They do just fall out of my brain. I do a lot of drawing on the tram. So not forcing myself to draw, just drawing to pass the time, and then I’m in a state of openness.”

The bright colours however, have always been there.

“There was always these bright pinks and blues, I think it’s been in me for a really long time. I think it comes from rave music actually. Isn’t that weird? If I think about it, I used to love when the warehouse parties started up in Adelaide, I was a bit young but I remember seeing kids walk around the city and they just had the maddest colours and clothes, just bizarre. Because Adelaide was quite famous for its techno in the early 90s. I remember this one guy had a glow in the dark skeleton hand around his neck and thought it looked so cool. Maybe if I saw it now I’d just think you crusty hippy, but at the time I remember thinking yeah. I think the whole acid house bright colour thing never went away for me.”

In fact the art continues to be an overriding factor in Mystery Twin.

“If I do a follow up album it would be my dream to do more of an art book meets album. Because I don’t think I’m much of a performing artist where you have a band or a group or an act and then they play live. I’ve always been more into drawing and painting and it was only when playing with Jason that I would come out of my shell. That’s why I haven’t played Mystery Twin live. I don’t know how to.”