Not even the 867m ascension up the Blue Mountains was enough to ward off the sweltering 42Ëš heat. It didn’t take long for Michel Doneda to work up a sweat, opening the second day of the annual Now Now Festival of Spontaneous Music. Applying extended technique to his soprano and (I think) soprillo saxophones, his half hour of sometimes phantom playing, sometimes gurgling and guttural, was an excellent set to establish some of the parameters that would be explored over the following 7 hours. Not being a sax player myself, it felt as though much of what might be amazing passed well over my head. I’m certain there were some sounds he produced which were technically extraordinary, but my frames of reference always had me thinking in terms of sound association – plumbing, didgeridoo, air valves. No doubt this undermines Doneda’s achievement, but what is a non-sax player to do? The academic austerity managed to disperse as Doneda progressed, however – a brief interlude with a bothersome fly at one spot allowing wry smiles across the room, and the amassed range of the performance appreciated by way of the rapturous applause at its conclusion. 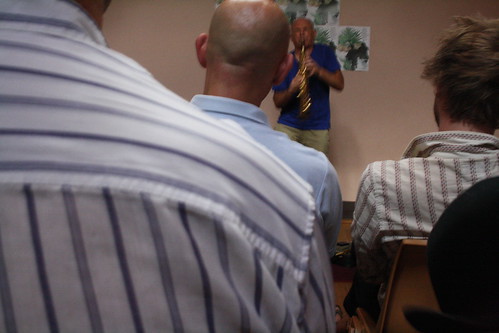 The audience was then ushered into the Wentworth Falls School of Arts main theatre, where a quartet performance on a collection of Kraig Grady’s hand built microtonal instruments. The showpiece of the performance was undoubtedly the Super-Large Vibraphone, built from metal plates suspended over large metal pipes which, by the time all four members were gently hammering away, created an immense swarm of deep harmonics which filled the theatre. The four then gradually moved on to different microtonal xylophones and a pump organ. The loosely scored piece paced through distinct movements as instruments were changed and rhythms adjusted. It was a pulsing, vibrant work. It contrasted with Doneda in that the sound was primary over technique, even though the players obviously had an expert grasp on what they were doing. This was undoubtedly one of the high points of the day’s activities. 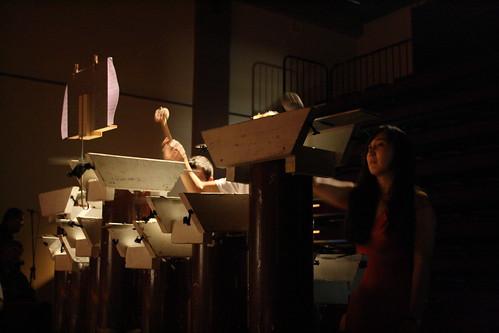 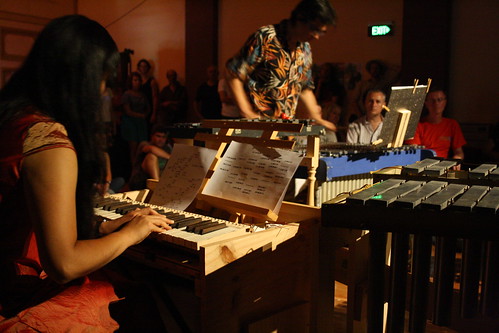 An Australian/Norwegian quintet of Laura Altman on clarinet, Rory Brown on prepared double bass, Aemon Webb on electronics, Kim Myhr mostly on classical guitar and Espen Reinertsen on tenor sax were back in the centre’s front room. Obviously less experienced from their young age, the quintet never quite scaled breathtaking heights or found new sonic terrain, but there were many sparks to hold interest – a segment of sax and electronics interplay where the source of each sound became blurred; some of the sudden bangs of Brown’s bass adding excitement; the visual spectacle of Altman’s homemade clarinet mute held in place by her feet. 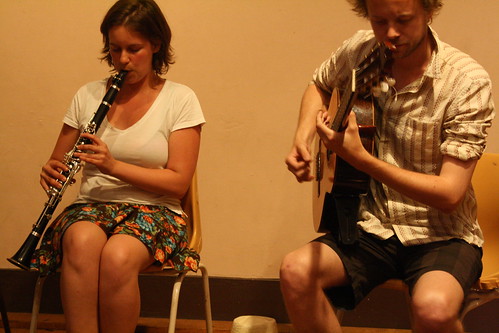 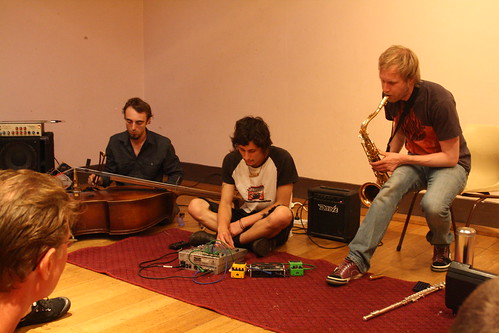 The next piece was the most theoretically rigorous but, conversely, probably the least musically successful. The premise is that the players, tonight consisting of Abel Cross on electric bass, Adrian Klumpes on synth, Tony Osbourne on vocals, Hirofumi Uchino on noise guitar and Claire Herbert and Fred Rodrigues on controlling laptop, do their regular improvisation, but the audience is at liberty to make their own contributions. Titled the SIMS Project, the work is an interactive one, with the audience invited to control the turning on and off of four different effects processes for each instrument player. As these four improvise, audience members SMS specific words to the main laptops and these instructions act as on/off switches. An interesting concept, but the outcome was largely forgettable. The prescribed effects were very severe – pitch shifters, bit crushers and the like- which had the effect of removing any shreds of subtlety from the performance, particularly when applied pretty much at random. The players themselves seemed to struggle with their prescribed roles. Cross’ bass was pitch-shifted up for the majority of the performance so he was unable to find his own space in the sonic field. For just a few minutes he was able to give a low, rumbling grounding and this was easily the most potent section of the performance but was cut abruptly once someone in the audience pitch shifted his sound back up again. Klumpes spent much of the performance sitting back with a look of consternation on his face and, even more tellingly, at one stage pulled out his own phone and began texting in order to try to get a sound he was happy with. 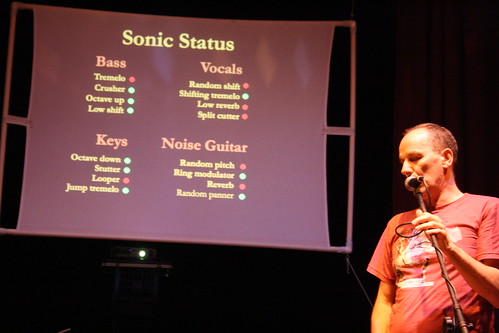 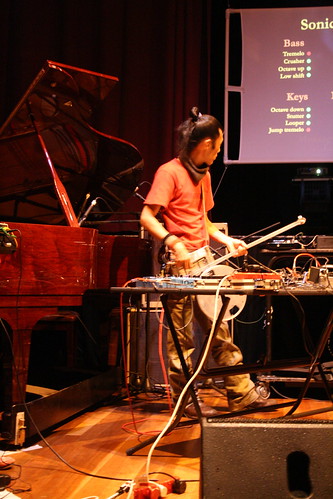 Quintet Experimenta from Argentina were the day’s other great highlight. Not only did they supply a series of relatively short, distinct improvisations but they utilised an idea often neglected in improvisation circles – performing to an audience. At times this came by way of the physical nature of their instrument play. Adriana de la Santos climbed all around her prepared grand piano,even spending one track perched underneath to create sounds. Zypce moved up and down his home made percussion instrument, a sort of mutant workshop tool with its range of bits amplified by contact mics. At others it was just the exuberance of losing themselves in the sound, but it gave visual focus (something that was slightly diluted by the couple of brief video projections). At times they ventured into regular rhythms, at others noisy washes. There was constant light and shade across their set with each member contributing discernibly and significantly. These were well seasoned improvisors. They worked within established parameters for each piece, but this gave their set the ability to jump around without becoming disjointed. The little flourishes, like Zypce finishing one track by playing back a recording of it created in situ on his mobile phone or Grod Morel (on sampler/laptop) looping his live coughing as a rhythmic bed for another track, were lifted above gimmick by the context of continual playfulness in the entire set. 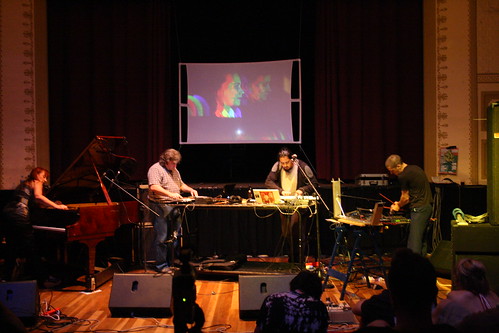 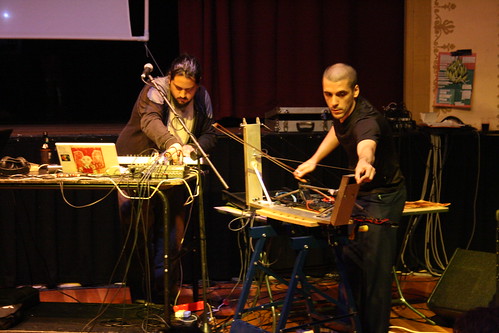 Potato Masta seemed an incongruous addition. I’m reasonably certain the Now Now Festival has never quite had a packed dancefloor, but it did create a nice contrast to the more cerebral work. How much of his music was spontaneous is debatable – he basically played backing tracks of fairly standard digital dub over which he occasionally rapped or twinkled on a keyboard, and played with a single beat cutting effect over the entire sound fairly regularly. It was fun and sounded great, but I know from experience that there are dozens of electronic producers around Australia making much more progressive, much more improvisatory music with just as much focus on physical movement. Potato Masta felt a bit like a curator’s idea of putting someone on the bill to ‘push the boundaries’ of the improv traditionalists, but finding themselves out of their depth (a little like me reviewing solo sax improv!). It was no fault of Potato Masta (Brisbane’s Hayato Yoshinari) who did what he did well, but if the curators want to be more ‘with it’s they should scratch a little deeper. 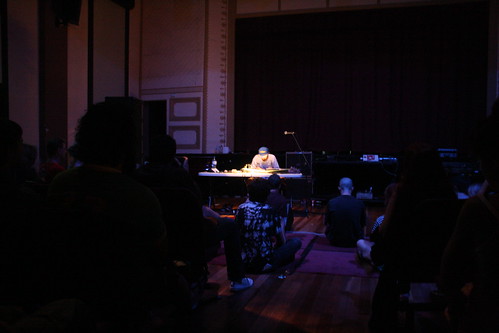 Chronox (Lachlan Con and Michael Prior) provided a soothing set of improvised electronic drone. The focus of the set, however, was visual, as a projector mounted on the ceiling projected with circles onto the floor below. Placed on that floor were a series of glass bowls, each the size of the circle of light it sat under and each containing milk. As the duo began to play, certain frequencies triggered the light projections. As the sound grew in intensity, so did the intensity and number of flashing circles. This provided a very spellbinding visual focus well suited to the sound. One criticism might be that the narrow scope of the sinewaves meant that it was, once there was any level of intensity happening, virtually impossible to match specific lights with specific sounds or volumes, meaning that whatever was triggering each light became rather redundant. This also meant that the light and sound separated from each other – what might have been trance-like was left at very good eye candy with an excellent soundtrack. 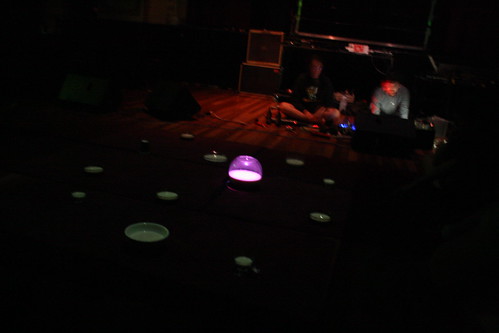 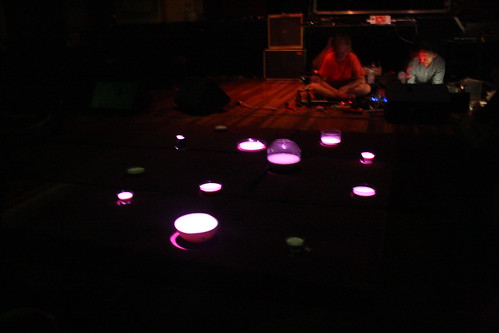 Last up for the day was Jon Rose on an instrument listed in the program as ‘fence’. A metal frame about 3 metres wide and 2 high was traversed by five metal strings. Rose played these with violin bows. He played for about half an hour. It was mesmerising. The range of sounds elicited from the instrument was pretty incredible, aided by subtle use of distortion and equalisation. He played it as a virtuoso, completely in control of the rise and fall of his set as he walked back and forward, bowed, banged, plucked and stomped on his instrument. One ironic thought that entered my mind was, if he is getting this range of sounds from his instrument playing it as it was intended, imagine what he’ll do if he starts exploring extended technique! 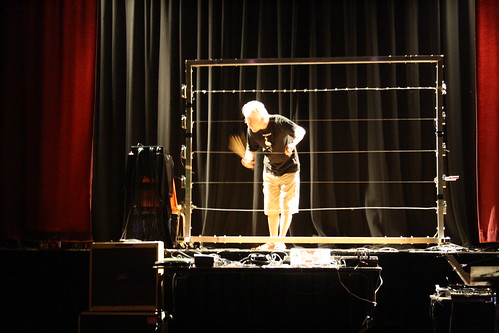 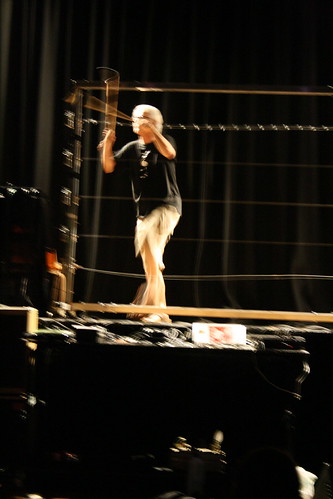 Reading back over all that, there might be a perception that there was a fair bit to be critical of. It was, however, one of the more enjoyable evenings of music I’ve seen in quite some time. As with all improvised music, there will inevitably be flatter sections. But the quality on display over the course of seven hours here was very high, criticism only in some of the details. And when it reached heights, they were high indeed.

Adrian Elmer is a visual artist, graphic designer, label owner, musician, footballer, subbuteo nerd and art teacher, who also loves listening to music. He prefers his own biases to be evident in his review writing because, let's face it, he can't really be objective.