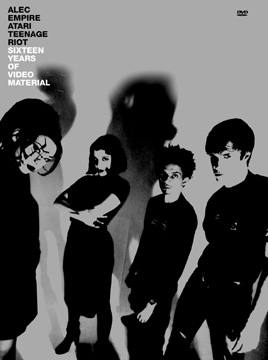 In the early 90′, from under the rubble of the former East Berlin, Alec Empire, Hanin Elias and Carl Crack put together a series of performances and recordings that were to form the genesis of Atari Teenage Riot, with the mute, face-tattooed Nic Endo joining in 1997, the band gained a worldwide audience. The group dissolved in 2002 following Crack’ suicide but the surviving members, Empire in particular, have continued down the same anarchic path. The principal artist throughout this video collection is video director Philip Virus, who has been with ATR and Empire since the band’ inception. He presents the band as cyber-terrorists in all their garish, VHS-smeared, early computer-graphic glory, a technique the artists liken to that of the early Xeroxed zine culture. While they might have been a fun antidote to the hopeless music of late 90′ MTV (I’ve been racking my brain and can’ think of a worse time in the history of music, the advent oftTechno notwithstanding) the videos and songs themselves haven’ aged at all well. But they are still funny as hell.

Of course its not meant to be. We all know Germany as the land without laughter but when you pick out some of the lyrics and the appallingly structured songs you can’ help but fall off your chair in disbelief. Thank Christ, then, for Empire’ commentary. Despite the fact he mentions every video as “an extremely important’s and “key song’ for the band, he does provide a sobering and articulate context for what would otherwise be unnecessarily angry tirades against all forms of thought and action. He mentions – without a hint of irony during ‘Revolution Action’ as the screen flashes between the band looking angry and scenes of faceless office workers tearing shit up – that the band “were trying to search for and teach a sense of individuality in a mindless, post-industrial, consumer-ridden society”. (Empire’ words, not mine.) Which I’m all for, but to see anyone strive for such an idea by repeatedly and artlessly hammering inane words and beats at is to witness the anarchy at its worst. Its anarchy without form, anarchy – witnessed out of context, as it no doubt was at the time – without cause, when it appears at its most dangerous and alarming.

I do have some favourite moments though: The band performing on a float in the middle of a May Day march in Berlin and getting arrested after helping to incite a riot, an incident Empire mentions was peaceful until the police went apeshit, having no conception of what his music is made of. And the “Revolution Action’ video which is just so fucking silly its hard to believe. Actually, quite a lot of this collection is hard to believe.

Atari Teenage Riot no doubt live on in some self-harming Japanese teenager’ mind as their saving grace but for my mind they’re as pointless and as life-affirming as a kick in the teeth.