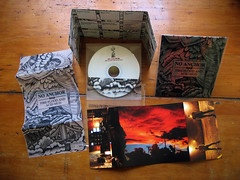 The monster riffs and psy-kick offerings of a handful of bands throughout this decade has lead many, who mightn’ have otherwise been allowed, to discover for themselves the rough energy and sonic sensibility wrought by metal over the years. Countless kids are referring back to the Black Sabbath and Earth catalogues to pull together their own brand of noise-rock. And so it is with Brisbane’ No Anchor. A duo comprising of bass and drums, they have put together, entirely on their own, their first release, Fire Flood And Acid Mud.

After an awkward start in â€œWatery Graves,â€ they launch with blistering pace into â€œYr All Gonna Pay For That Music You Made,â€ and keep firing all cylinders through â€œA Complicated Web Of What-The-Fuck-Ever.â€ All the way through the bass tears holes in the speakers and drums pound away incessantly. â€œDead Ampsâ€ and the massive closer â€œThe Seamâ€ sound like New Zealand noise-talkers Trash – that is: a spoken monologue of what-the-fuck-ever over a hailstorm of noise, feedback and consistent but altogether messed up drum pattern. The weight and intensity of the tracks, whether they’re speed-jacked crashes of manic noise or impossibly slow drone riffs, is felt throughout.

More’ the shame though, when artists, in an attempt to emulate their heroes (in this case, Lightning Bolt, Melvins, et al.) come off sounding not nearly as confident as one might have hoped. Despite having acquired a killer sound, No Anchor seem to find trouble pushing things further. An excellent effort though, considering all recording, releasing and packaging (a highlight with its fiery orange photos behind see-through religious-themed lithographs) was conceived and finished by the band themselves.