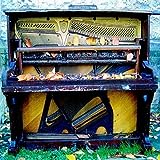 I’m not sure if fandom is a caveat worth mentioning in a review, but let it stand: I’m a rabid Hood fan, and even before I knew a lot about Hood I was a fan of Chris Adams’ incredible experimental dark drum’n’bass as Downpour. The guy’s a genius, and I’m not sure whether to be pleased that the greatest band in the world is so obscure (you know, “my little secret”), or more to the point sad that they don’t have the financial success and big name they deserve.

In any case, along comes Chris Adams’ new project, Bracken. It’s suitable that it’s released by the Anticon bods. Way back in 2001, Doseone and Why? made perfect guest vocalists on Hood’s breakthrough (ha!) album Cold House, while Odd Nosdam’s clearly a longtime fan, featuring a number of Hood tracks on his stunning Le Mix Tape some years ago. Hood’s influence can be felt now as most of the Anticon luminaries make their way further into indie rock territory, and meanwhile Adams makes probably the most electronic of his songwriting-based albums yet.

Fandom aside, We Know About The Need is nothing short of sublime. With “Of Athroll Slains” the album starts as it means to go on, opening with glitchy rhythmic guitarscapes and plaintive indie vocals that are shortly underlined with a pounding dubstep beat & bassline. Adams’ proto-breakcore and electronica as Downpour was pitch-perfect and so ahead of its time that the first EP swiftly became legendary. So it’s no surprise that he’s still ahead of the game, and has ingested the feel of dubstep and completely incorporated into this new sound. Nobody would call “Of Athroll Slains” dubstep, but I mixed it into a track from MRK1’s new album the other day and it worked perfectly. (There is, by the way, a genuine dubstep remix of the single “Heathens”, released under the Downpour moniker, on a very limited CD that Norman Records gave away with the 12″.)

If one could name a weakness across Adams’ output, perhaps the thing that’s held Hood back from stardom, it’s probably the fact that he generally eschews catchy melodies. It may be that they’re generally beyond him (Hood’s “I’ve Forgotten How To Live” is about as close as he’s got), but it’s just as likely that he’s more comfortable keeping in the land of half-caught lyrics and workman-like melodies that nestle in with the dense production and musical evocations. Certainly on a track like “Evil Teeth”, the wild and glitching drum soloing, drones and stuttering sax samples are on equal par with the vocals, which wail like a lone East European folk singer. Adams is always happy to send his vocals through the shredder, reversing them, layering them, piling on the reverb so they end up as just another instrument in the mix.

But that’s not to say that this music isn’t catchy and recognizable: every time the album reaches “Four Thousand Style” I get a jolt of recognition, because it was up on the MySpace last year along with “Heathens”. Just don’t expect me to be able to sing along.

This album is rewarding on all levels (even lyrics, with snatches of words recognizable at just the right time to mysteriously accentuate something in the music). It’s dense stuff, full of continual invention, thoroughly through-composed so that no two phrases are treated exactly the same. It brings acoustic folk, indie angst, high-tech digital editing, razor-sharp beats spanning dubstep to hip-hop to breakcore, dub bass and rapturous drone all together into something that despite all that is greater than the sum of its parts. It’s ramshackle yet precise, stylistically diverse yet stylistically cohesive.